As I blogged last week, I love my new Sonos Play:1 music speaker. It’s such an elegant and simple way to play my music. But it has forced me to tame the iTunes monster.

The reason? The Sonos system won’t play music from iCloud. Any music in your iTunes music library has to be on your device rather than the cloud. (By contrast, Spotify and other streaming services work fine, although Spotify has proved temperamental with Sonos.) This revelation showed how much of my 10 year iTunes collection is in the cloud.

This was a shock. Many of my favourite albums had tracks missing. Some had just a handful of songs. What happened to them? I wondered if I had deleted multiple copies of songs years ago to save hard disc space of my old computer, without realising I was shredding albums. Whatever the reason, it cost me a lot of time ripping the missing songs again.

The next surprise was that iTunes had split many albums into multiple separate albums. It took a while to understand what was going on. I discovered that it was all down to metadata – the information that iTunes holds about the music. Here are a few key lessons:

Check the info iTunes has about the album. (‘Get Info’ when the album is highlighted – see screenshot below.)

Checking the info iTunes has about an album

I discovered that in many cases iTunes had different info in the key boxes for the same album. For example, I found that albums with several CDs had ‘disc one’, ‘disc 2’ etc in the album title. This meant that iTunes assumed they were different albums. Deleting the disc number from the album title meant iTunes now recognised them as a single album. See below. 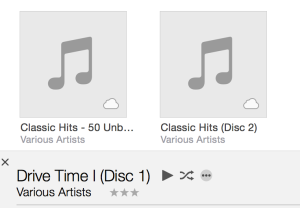 The next lesson was that some tracks mysteriously had different info in the crucial boxes. In the example below, iTunes has ‘The BRIT Awards 2014’ and ‘BRIT Awards 2014’ for the same album. That missing definite article is enough to separate the tracks into different records. I had to go into the Info box and edit the entries to ensure they were consistent.

Weed out those iTunes title inconsistencies

The other complication was that many albums include more than one artist and composer – even if it’s technically not a compilation album. Again, I had to edit for consistency to merge an album into the original single album. (If it is a compilation, you should ensure the box confirming it is a compilation is ticked.)

Finally, and less importantly, iTunes seems less able to provide album cover artwork these days. You can ask it nicely, as shown below:

But in my experience, this rarely provides the right cover, unless you bought the album from iTunes. For a lot of compilation records, it supplied an image for one of the individual tracks. Here, I had to look to eBay, Google or Amazon for an image of the record’s cover, which I then saved as a screenshot. I then went into the Get Info tab (see the earlier screenshot) and clicked the Artwork tab to attach the true image.

It’s taken many hours but my iTunes library is now in a fit state. The mystery is why iTunes is so much more temperamental than when I started using it exactly 10 years ago. It’s a shame that Apple and the record companies don’t make it easier. But then why would they make it easy for us to enjoy our own music rather than prompting us to pay to download it again?

PS: ripping my old CDs showed how much we paid for music in the 1980s. Record companies typically charged £13 for an album. Back then, I wanted the Beatles blue and red compilation records but wasn’t prepared to pay £30 for each of them, so I bought the vinyl versions… The digital revolution has saved us a lot of money, even before you consider the great value of streaming services like Spotify.