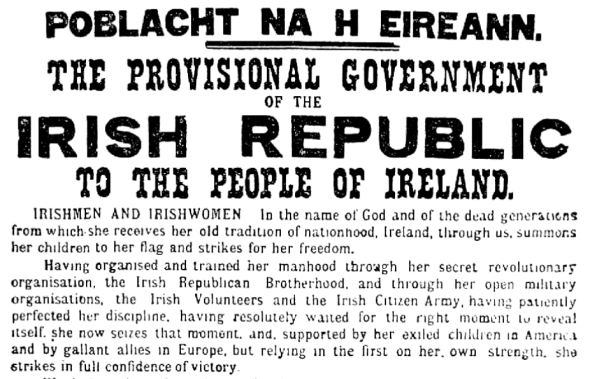 Easter has long been hugely significant in Ireland, and not just for religious reasons. The Good Friday agreement of 1998 marked the end of the Troubles in Northern Ireland, despite later tragedies such as Omagh. But the really significant event was the Easter rising of 1916, which Ireland marked today on a grand scale.

I blogged a decade ago that 2006 was the first time Dublin had staged a public parade to mark the Easter rising since the start of the  Northern Ireland Troubles in 1969. That murderous conflict complicated Ireland’s relationship with 1916. Ireland and Britain have an even stronger relationship now than in 2006, as the Queen’s visit to Ireland in 2011 and Irish president Michael D Higgins’ state visit to Britain three years later showed. 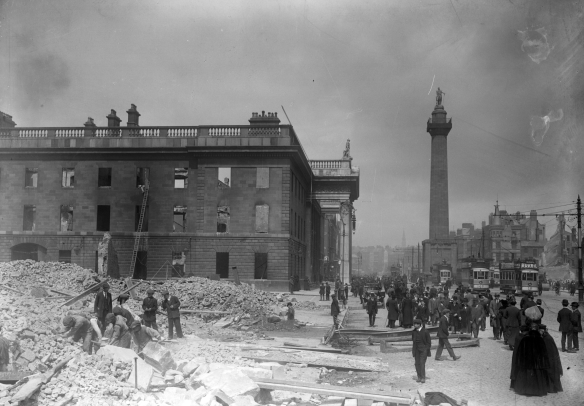 The GPO in ruins after the rising; Nelson pillar to right (National Library of Ireland)

The British response to the Easter rising is an object lesson in how to turn a victory into a crushing defeat. You’d hardly believe watching the scenes from Dublin today that the 1916 rebellion was initially unpopular with many Dubliners, especially because of the devastation and civilian deaths. Yet the brutal response of the British authorities, especially the execution of 15 rebel leaders, sealed the end of the 26 counties’ place in the then United Kingdom of Great Britain and Ireland.

It was simply the latest example of the stupidity of the British ruling classes. Had William Gladstone succeeded in implementing home rule for Ireland in the 1880s or 1890s, the odds against any rebellion would have been even greater. But the old guard refused to budge. The UK parliament finally agreed to home rule in 1914, only to suspend it for the duration of the Great War.That was far too little, too late.

It took a further five years before a Welsh speaking British prime minister, David Lloyd George (who earlier famously called for ‘home rule all round’) to negotiate the treaty that led to the 26 counties leaving the UK. The new Irish Free State wasn’t yet a republic: that came later in 1949.

And Nelson’s pillar, seen in the 1916 photo above? It was blown up in 1966, shortly before the 50th anniversary of the Easter rising. It was built years before London’s Nelson’s column, and survived the 1916 revolution for half a century.

I have been fascinated by Irish history since studying it at school in Wales in the 1970s. I was horrified by our history teacher Dr Davies’s tales of the state of Ireland a century before. I saw Gladstone as a hero for trying to address the shocking treatment of Irish tenants at the hands of the English landowners, and for his attempts to enact home rule.

Last summer, I was treated to a fascinating tour of historic Dublin by our PR agency in Ireland, Comit. I was moved by the memorials to the terrible times that Dublin has seen, not least because of the past misdeeds of the British. As a Welshman, I felt detached enough not to feel judged by the past. (After all, the English did terrible things in Wales too.)

The British should be mature enough to shrug off any sensitive feelings over Ireland’s celebration of the Easter rising. After all, we cope well enough with America’s July 4 fireworks.