I cancelled my digital subscription to the Daily Telegraph today. A shame, because it’s one of my favourite news apps. But I’m not willing to pay £10 a month for what has become a general election propaganda sheet for the Conservative party. I’ll get enough of that for free through the letterbox. It’s living up to the Torygraph tag. 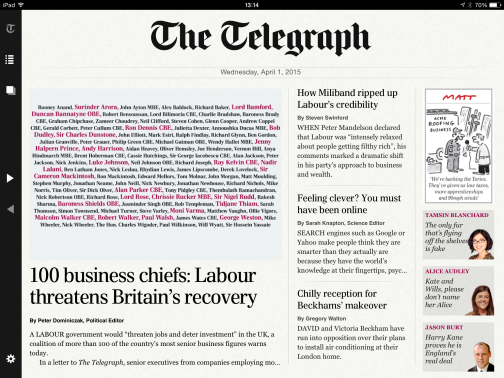 Every front page lead story for the past six days has attacked Labour or carried a pro-Tory message. Today’s reported that 100 business leaders think that Labour threatens the economy.

I exchanged tweets on this with the paper’s excellent and courteous technology editor Matt Warman (who is standing as Tory candidate in Boston and Skegness):

I don’t disagree that the business leaders’ letter was newsworthy. But if news is defined as the unexpected, this was right up there with ‘the Pope’s a Catholic’.

I’m an open-minded voter. I have blogged my doubts about Ed Miliband. I was even more critical of Gordon Brown, and welcomed the coalition in May 2010. But I do object to media outlets acting as useful idiots for one political party. I was equally annoyed when the Guardian ran a feature telling people to vote against Boris Johnson in the 2008 London mayoral election. As I complained to the Guardian’s readers’ editor in response, I take huge exception to newspapers telling me how to vote. Thank goodness for the BBC and other broadcasters, who have a duty to be impartial.

Here are the other Telegraph front pages, in case you’re pining for propaganda. 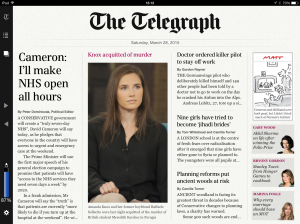