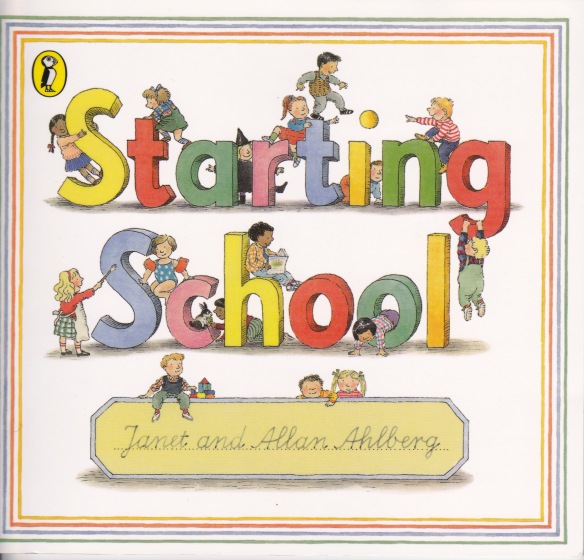 Owen started school this week, aged four years and two months. It’s a landmark in everyone’s life. We knew it was going to go well when he announced early that morning, “I don’t want Cbeebies, I want to go to school”!

I’m sure this reflects the fact he’s been going to the nursery attached to his new school for the last year.

Before he started at his nursery last year, we read him Janet and Allan Ahlberg’s wonderful story, Starting School, published by Puffin. It’s a beautifully observed account of a group of children’s first term at school, from the first day to breaking up for Christmas. It helped Owen understand what school is like, including the initial unfamiliarity.

Seeing Owen starting school brought back all my memories of my own big day in September 1968. (It was a long time ago – some three weeks after the end of steam locomotives on British Railways.) A year ago, I took Owen to see my old school, Bishop Perrin in Whitton, Middlesex, with my mum and dad. Bishop Perrin hasn’t changed much in the past 44 years (at least from the outside), so it was easy to imagine myself, aged four, playing with the sand and water on the front lawn in that lovely September sunshine in 1968.

Bishop Perrin was a wonderful school for me. The classes were small. In my first year, you could choose a friend to join you in a classroom wendy house to eat Smarties on your birthday. Headmaster Mr Davies insisted on keeping the traditional ways of teaching reading until the education authorities could show the new ways were more effective.

Last Wednesday, after we dropped off Owen for his first day in school, I drove past Bishop Perrin on the way to work. Happy memories.

My first school: at Bishop Perrin with Owen, 2011