Bryan Henderson is famous – as a pedant. The world’s media put him under the spotlight last week for correcting the same error 47,000 times in Wikipedia. He hates the phrase ‘comprised of’ – arguing the ‘of’ is unnecessary. The story took me back to my days reading Ernest Gowers’ The Complete Plain Words in university in 1984: it was one of the phrases Gowers singled out as a howler.

I’ve never edited a single Wikipedia entry. But I felt a tremble of recognition when I read of Henderson’s obsession. As I get older, I get more irritated by language (and number) howlers. Here are some of my pet hates.

Language inflation. Build out; test out; off of. Just a few phrases that have suffered parasitic appendages.

Doppelgängers: words that have been replaced by identical sounding cousins: it’s/its; your/you’re; there/their/they’re. Years ago, it’s/its was the most common error, but your/you’re seems just as common now:  ‘Your welcome’…

Talking telephone numbers: companies that spend money on beautiful shop fronts and signs, but don’t know that the area phone code for London is 020 and Cardiff is 029. I’ve lost count of signs giving numbers starting 0207, 0208 and 02920. 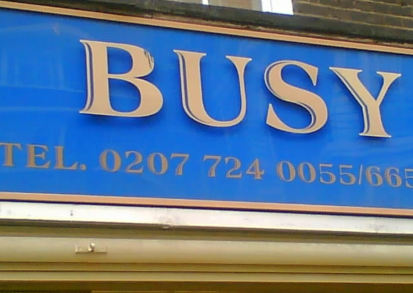 This Marylebone shop can’t get its own number right. Anyone dialling 724 0055 will get an unobtainable tone. The 7 in 0207 is actually part of the number, not the area code.

Does it matter? No, not compared with life’s real horrors. But accuracy does matter. Hats off to Bryan Henderson. Or hat’s off as some would say….