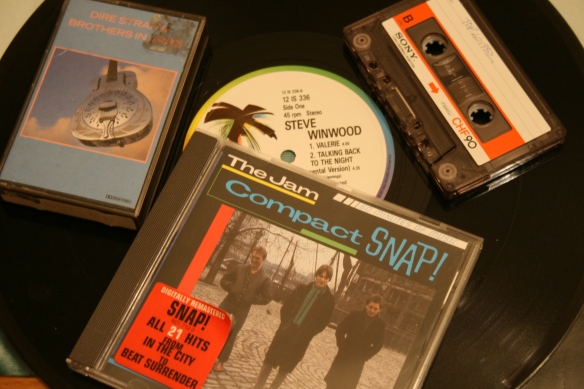 Music takes you right back. Back to a time, a place, a feeling.

Last night, on the way home, I heard The Jam’s Down in the tube station at midnight on the radio. It prompted me to grab my CD of the group’s Snap greatest hits album to play on the drive to work today. I was transported to a freezing cold night in Leicester in the winter of 1984. I was on the last leg of my journey back to my student house after a weekend home in Cardiff. I was listened to the cassette version of Snap as I made my way along The Newarke past the medieval Magazine Gateway.

It’s amazing to think that it’s 30 years next week that I arrived in Leicester as a very green fresher. The difference between studying at school, with its very structured, almost spoon-fed approach, to university lectures and seminars was a shock to the system. No one took any notice if you didn’t turn up to a lecture. To a much greater extent, you were on your own. Land law in particular was a challenge, although I coped. I much preferred civil liberties and law and medicine, although criminal law and tort were fascinating in their way. It seemed extraordinary that the law of negligence was then only 50 years old. (Until the famous ‘snail in the ginger beer bottle’ case of Donoghue v Stevenson in 1932, you couldn’t claim damages from a manufacturer of faulty goods that had done you harm unless you had a contract with them.)

We were also intrigued by the extraordinary final chapter in Canada’s independence from Britain. That month, the British parliament passed the act patriating Canada’s constitution to Ottawa. Until then, Canada was governed by the British North America Act 1867. It was a formality – Canada was independent decades before – but it meant that Canada would no longer have to ask Britain to amend its constitution. Native Canadians lobbied Westminster against the change as they trusted London above Ottawa. (It is, apparently, the only British act of parliament passed in French since the middle ages.)

The soundtrack of my first term at university was a varied one. Culture Club and the exotic Boy George burst into the charts with Do you really want to hurt me? I loved Tears for Fears’ first hit, Mad World (in the charts when I made my first weekend trip home to Wales at the end of October 1982), and Fat Larry’s Band’s Zoom, not to mention Dexy’s Midnight Runners’ Jackie Wilson said. But I also played a lot of the Beatles on my cassette player, plus tapes I bought at Woolco in Oadby. (Anyone remember Woolco? They were Woolworths’ superstores. Now consigned to history along with the music cassette.)

Leicester was a good place to be a student 30 years ago. Terry Wogan may have mocked it as ‘middle of the country, middle of the road,’, but it was an inexpensive place to live and the university of Leicester had a good reputation, especially as a law school. ‘Town and gown’ got on well, and the Asian community meant we had any number of great curry houses to savour. Washed down by cheap beer!