I love Lego. So it’s no surprise that Lego’s Lars Silberbauer was the star of today’s Brand Republic Social Brands event in London.

Lars started on a high: his business card is a Lego character. But his most compelling message was the way the brand has inspired its fans to share their creations and suggest new products.

Lars showed this brilliant video telling the story of Lego. It’s 17 minutes long, yet it’s been viewed by almost four million people. Over half have watched over 15 minutes, showing its appeal. I watched it with my four year old son Owen tonight, and he was enthralled. It shows the timeless truth: great content is compelling. It’s not a corporate video, but a magical story, beautifully told and animated.

I also enjoyed the story of how Lego rode to the rescue when an 11 year old American boy, James Groccia, found the Lego Emerald Night train set he had saved up for had been withdrawn. Lego sent James the precious set. It’s a great example of how delighting a customer can spread goodwill. (The home video showing his delight has been viewed over 1.6 million times.)

The other highlight of the day for me was meeting Nicola Clark, head of marketing and communications at Chiltern Railways. I’ve blogged many times about Chiltern’s excellent use of social media, so it was nice to hear more at first hand. Nicola said that social allowed Chiltern to become the brand it always wanted to be: human, caring about the customer, with real personality. She explained how the company started its social presence after seeing it as a great way to keep customers informed after the snows of 2009.

As Nicola said, passengers often just want an explanation when things go wrong. Tweeting photos of a line blocked by a tree shows us that there’s a good reason why the 0721 is late. By coincidence, Will McInness from Nixon McInnes made the same point, citing client First Capital Connect getting drivers to take photos of flooded tracks.

I took part in a panel discussion with Simon Nicholson from Honda and event chair Andrew Smith, co-author of Share This. I explained how PayPal is growing its social presence and how the company’s president, David Marcus, instinctively understands social as a way of engaging with customers and learning from their feedback. I added that the debate about who ‘owns’ social – PR, marketing or customer service – is meaningless. It should be a partnership with the needs of the audience centre stage. ‘Don’t ask what the customer can do for you. Ask what you can do for the customer.”

I’ll end with a personal story about Chiltern Railways. On Tuesday morning, I told Owen about the famous Pontcysyllte canal aqueduct in North Wales. I added that there was a railway locomotive named after it. I showed him photos from the internet of the aqueduct and the engine. That morning, I saw the engine racing through Gerrards Cross as I waited for my train. When I got to Marylebone, I took a photo (below) to show Owen later. We agreed we’d go on a train pulled by the engine one day… 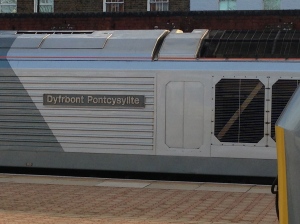 Disclosure: I am Head of PR & Social Media for PayPal UK