The London Underground celebrated its 150th birthday yesterday. On 9 January 1863, a Metropolitan Railway steam train made its way from Paddington to Farringdon to launch the world’s first underground railway.

The tube has played a vital part in London life: commuter network, bomb shelter and icon. It remains a precious symbol of life in the capital, even for those of us who don’t live in London.

It’s hard to imagine sulphurous steam trains operating in the claustrophobic stations and tunnels – amazingly, some Victorians thought the smoke health-giving, like going to a spa. In time, electricity made the Underground smoke-free. (And the first true ‘tube’, the City & South London Railway running from the City to Stockwell, was electric from the start in 1890.)

The Underground’s iconic status owes a lot to its long-lived corporate identity. The roundel is over a century old, and the typeface (although later modified) dates from the dark days of the Great War. Frank Beck created his famous map in 1933 as the Underground began life as a publicly owned institution: the London Passenger Transport Board, better known as London Transport.

The 1930s were in many ways the tube’s golden era with constant expansion, stunning architecture and new trains that served two generations and survived a world war. (I started working in London in 1987 as London Transport brought back 1938 trains to cope with demand.) Under Frank Pick, London Transport led the world as an integrated system of underground trains, buses and trams, as well as a patron of industrial art and design.

That public ownership has long outlived the nationalised British Railways – whose celebrated 1960s corporate identity has given way to an explosion of liveries and typefaces, destroying the very idea of a common network. In today’s Guardian, Andrew Martin rightly describes the tube as the people’s railway. Whether you’re rich or poor, you’ll usually find the tube the fastest, most convenient way to get around the city.

Despite its name, most of the Underground is actually overground. Amersham (above, with then one year old Owen with a 1962 train – built the year of the first Beatles single) is at the country end of the Met Line. Trains from Amersham only head into the tunnel at Finchley Road, a handful of miles from the 1863 line at Baker Street. That 1962 unit was one of the trains that replaced the last passenger steam services on the Underground after almost a century. Curiously, London Transport was still using steam for engineering trains as late as 1971 with former Great Western pannier tanks.

Finally, as Britain (apparently) faces a cold snap, here’s one of those 1960s Met line trains arriving at Farringdon on 17 December 2010. 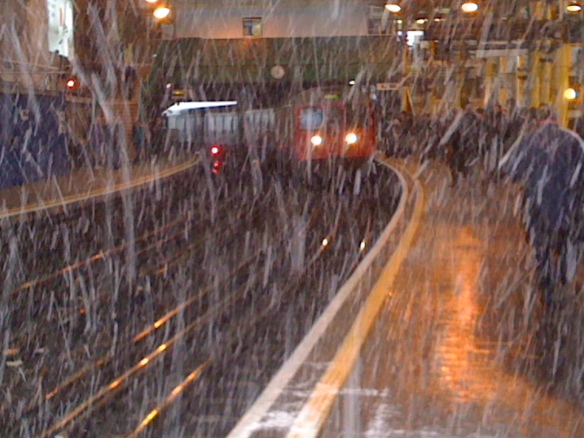