We had an unforgettable day at the London 2012 Paralympic Games today. We were lucky enough to get seats in the packed Olympic Stadium in Stratford, experiencing three new world records.

We had a great journey to east London from Buckinghamshire (birthplace of the Paralympics in 1948). We caught one of the new Met line trains from Amersham to St Pancras before catching a Javelin high speed train for the six minute trip to Stratford. (What a brilliant idea to give free London travelcards with London 2012 tickets – it made the Paralympic tickets the biggest bargain of the decade!)

It was lovely to see our niece Siân at work as a Games Maker at Stratford Gate as we went through. Volunteers like her, and everyone involved in organising and running the games, have done the country proud with their incredible efforts.

It was so good to see the Olympic Stadium packed for the Paralympics. Great Britain was the birthplace of the Paralympics just after the second world war, as a new start for soldiers who had suffered spinal injuries during the war. (Karen took part in the opening ceremony of the 1984 Paralympics at Stoke Mandeville.) We were keen to support the games and to celebrate amazing athletic achievement.

Anyone watching the Paralympics would have been inspired even more than by the achievements of Olympic athletes. I couldn’t help thinking of that old expression to describe the disabled: differently abled. That epithet was mocked by some as politically correct, but you can see this week why people wanted to redefine disabled people by what they could do rather than what they couldn’t. (As I write this, David Weir has just claimed another gold medal on the track, proving my point.)

We have lift off…

We saw so many families with children at the Paralympics, as we had at the Olympics football opener in Cardiff. London 2012’s aim of inspiring a generation seems to be doing just that. I heard children on a Cornish beach talking in awe about the speeds recorded by amputee cyclists at the Paralympics. And it may be a coincidence but Owen has become a swimmer during the London 2012 summer! Above all, we wanted Owen to understand that personal endeavour and determination can overcome life’s setbacks to achieve amazing dreams.

The sour note of the Paralympics came on Sunday night when South Africa’s Oscar Pistorius protested about his defeat in the T44 200 metre final. Some commentators said this showed that the Paralympics had arrived as elite sport. Perhaps, but it would be sad for the Paralympics to witness the kind of lack of sportsmanship that now plagues football. Happily the Olympics and Paralympics have been graced by tremendous sportsmanship.

The Olympics have transformed Stratford. The stadium, velodrome and aquatic centre are stunning additions to the east end of London. As we discovered, Stratford has brilliant transport links across London and beyond. But it’s a shame that many of the other developments do little to lift the spirits. Leaving the Olympic Park towards the Westfield centre, every building ahead of us was an ugly box. This is a big opportunity missed. We just hope that London 2012 provides a longer benefit here. 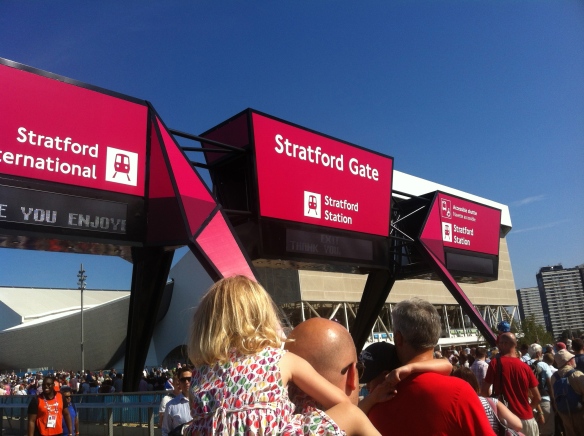 We’ll remember our day at the Paralympics for the rest of our lives. Thank you to everyone who made it happen. Especially those amazing, inspiring athletes.

1 thought on “Our brilliant Paralympics day at Olympic Stadium”