Above: Cardiff gets the 2012 Olympics underway

I never thought I’d witness the start of an Olympic Games in my hometown, Cardiff. But that’s exactly what I saw today as Team GB’s women’s football team beat New Zealand 1-0 in the London 2012 opener at Cardiff’s Millennium stadium.

The atmosphere was special as Cardiff welcomed the world – something it’s used to doing as the home of Welsh rugby. It was lovely to experience a genuine enthusiasm for the Games from the many families in the stadium. And the Millennium team did a wonderful job, despite the mad rules imposed on them, such as not allowing us to take bottles of water in on a scorchingly hot day. (The Olympics Gestapo have a lot to answer for. Presumably they were also responsible for the appalling queues for drinks as half the bars weren’t open, which meant many missed the GB goal, as they were still queuing for half time drinks 15 minutes after the break.)

The game was a great advert for women’s football. The action was fast and furious. And it was magical to see the first score of the 2012 Games – for Great Britain.

Below: four year old Owen sleeps through the action. 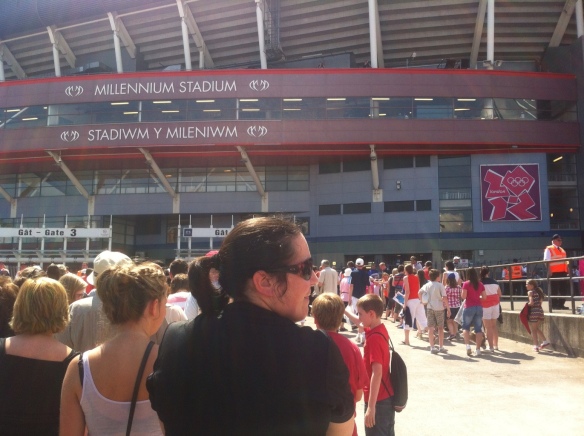 Above: welcome to Cardiff