Ten years ago this week, I set off on my bike from Land’s End at the south western tip of England. My destination: John O’Groats in the far north of Scotland. I was cycling the ‘end to end’ – in short, Britain on a bike. I reached my destination after 16 unforgettable days.

It was the fulfilment of a six year dream. Back in the summer of 1996, I read an article about the end to end. I was inspired to have a go, and bought a new touring bike the following year with that in mind. Bizarrely, a book about Charles Lindbergh’s feat in becoming the first person to fly the Atlantic solo provided the final prompt to stop dreaming and start pedalling.

Those 16 days in June proved an extraordinary odyssey. Not because the end to end is unusual: thousands do it every year. But because you see your own country in a very different way on a bike. You see the landscape, the architecture and the accents changing with every passing mile. My ride coincided with the 2002 football world cup, and the Welsh border was clearly marked by the sudden absence of England football flags! 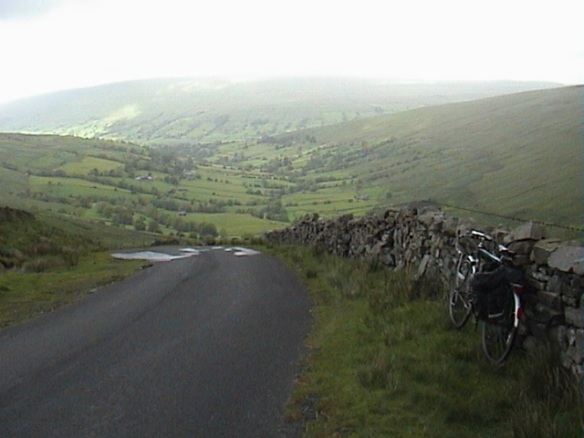 My favourite days? Discovering the beauty of Dent in north Yorkshire and cycling across the Cumbria border to the lovely town of Kirkby Stephen. Revelling in the eight mile downhill swoop from the Devil’s Beef Tub near Moffat in Scotland. Enjoying a beautiful day following Loch Linnhe to Fort William, before paying tribute at the Commando monument in the hills beyond Ben Nevis. And seeing Karen as she overtook me in her hire car near Thurso when she flew to see my complete the challenge.

The toughest days were early on. Cornwall and Devon posed a challenging start. On the second day, from St Colomb Major to Moretonhampstead, I crossed seven major river valleys. The next day, I could barely turn the pedals as I set off. Further north, I reached Clitheroe, Lancashire in a dramatic storm, and made waves as I cycled the last few miles to the camp site. It was flooded, which led to the bliss of a night in a hotel rather than under canvas.

I used the ride to raise money for a Welsh cancer charity, FaceUp, which helps people recover from the effects of surgery for facial, oral and neck cancer. I’d like to thank everyone who supported me, including the landlord of a pub near Carlisle who made a donation!

If you’ve ever dreamed about doing the end to end, do it now. You’ll have memories to treasure for ever.

PS: I did the 1,060 miles on my Raleigh Randonnneur without a single puncture. A tribute to a design classic. It now carries Owen’s bike seat…