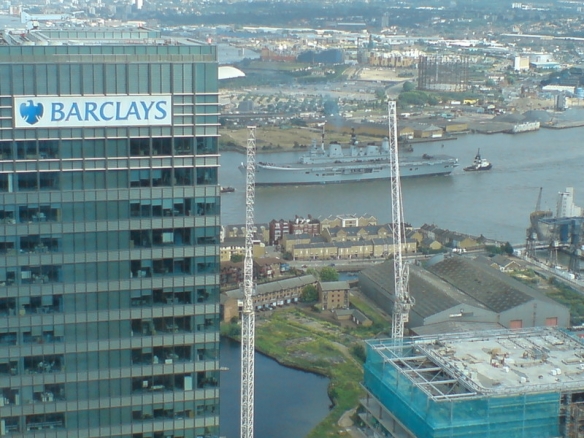 Above: the government must wish it still had an aircraft carrier for the Olympics securty fest: HMS Ark Royal on the Thames, London, 2007

A government wants to place missiles on top of people’s homes. It has based a warship on the river through its capital, and set jet fighters on standby. No, not life in a military dictatorship. This is Britain on the eve of the 2012 London Olympics.

As the Guardian’s Simon Jenkins pointed out last week, the Olympics has become a festival for the global security industry, with a £1bn price tag. That’s not to say that terrorists won’t see London 2012 as a target, but it’s hard to see missiles on the roofs of flats as anything but a grotesque gesture. This is not Berlin 1943, or Syria 2012, but London, a city that has long shown resilience not panic in the face of aerial bombardment and terrorist attrocities. The excellent Tedious Tantrums blog has also highlighted the craziness of all this, along with the police’s growing alarming overreaction to peaceful protest.

It’s time politicians got back in touch with reality.